💡 Skip ahead and learn about Runme's features? The project website's got the cliff notes: https://runme.dev/

In our ongoing efforts to make documentation more reliable and less susceptible to bit-rot, we released the runme CLI (renamed from rdme) back in August. The CLI lets you effortlessly execute shell blocks inside your README.md docs from the terminal. We’ve been pleasantly surprised how well it was received. Thank you all for the comments and feedback!

Zero-changes required to turn your README.md into a runnable notebook

Today we want to take Runme a step further and break out of the confides of the terminal. Anecdotally (yet not the sole motivator) one of the more notable comments in response to the runme CLI (renamed from rdme) was this: 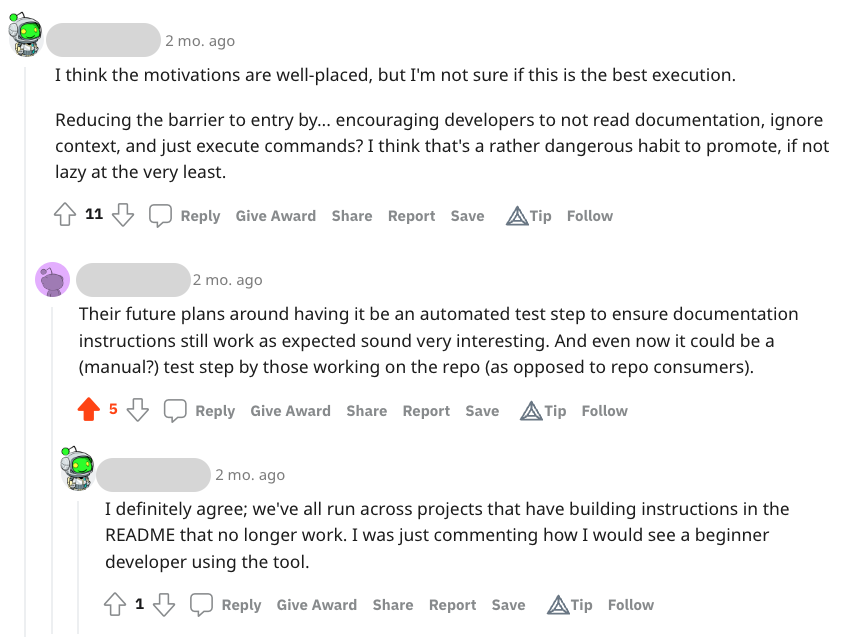 The point’s well taken! We wholeheartedly agree that it’s important to READ your README.md before running the commands it describes. With today’s Runme release, this just got a whole lot easier:

Breaking Out of the Terminal

We wanted to expand beyond Runme’s CLI implementation to:

We took a good look around and found inspiration in the Data Science Community: DS loves Jupyter Notebooks! Notebooks elegantly interleave code, computations, numbers, and narrative to lean on the dynamic where scientists prepare notebooks that can be consumed without much fuss by anybody.

A notebooks inherent ability to reevaluate (literally run) every paragraph (input & output cells), in a low-code fashion, naturally aids a reader’s comprehension of the information laid out in front of them. This enables improvements to notebooks to be easily upstreamed using Pull Requests as notebooks live in version-tracked repos.

Bingo 💡! It turns out that repo maintainers and contributors have a similar relationship to the DS community when it comes to technical documentation.

After a fair amount of experimentation, we decided to build a VS Code Extension UX on top of the Runme parser. This extension will now make your README.md (onboarding and runbook docs) available within a VS Code powered Notebook Experience requiring zero changes to the underlying markdown. To showcase an end-to-end example, we’ve assembled a repo https://github.com/stateful/runme.dev (backing https://runme.dev) using Deno’s Fresh web framework, a CMS, testing, and deployment. Here we go:

Leveraging VS Code’s Notebook APIs (that underpin notebook rendering) Runme displays your README.md (or any other markdown file) as an input & output cell in a notebook.

Annotate your fence code blocks to curate your shell execution

Beyond Shell and Terminal

To provide broad compatibility with existing READMEs and their potential usage of CLI tooling we chose to first unlock shell execution in Runme Notebooks. However, just like Jupyter has first-class integrations with plotting libraries and other rich visual renderers, we saw an opportunity to enrich the UX by going beyond the text representation and bring in rich web experiences.

To showcase how this will work, we started with our friends at Deno 🦕:

Deploy to both Deno's preview and production with ease

We are envisioning a world where instead of logging into dispersed cloud web consoles (made available by service providers), you could just drop a web component into a cell that exposes a programmable UX for different parts of their APIs inside of your Runme Notebook. We believe that this approach has lots of potential to lead to a more concise and maintainable way to document full stack applications and services.

What do you think?

Interoperability With the CLI

While we believe that Runme Notebooks will provide a much better onboarding experience for new contributors, we understand that maintainers and power contributors may want to skip ahead. The same is true for execution inside of CI/CD, which is why we designed Runme to function in a headless way via the runme CLI.

We are still experimenting with UX and deciding where to draw runme's architectural boundaries and working to achieve broader interoperability (e.g handling ENV vars in the CLI). One of our goals is to maintain a symbiosis between CLI and Notebook implementations to achieve the best possible Developer Experience for reliably runnable documentation.

We chose to release Runme early as an invitation to the dev community to participate in it’s on-going development. Both the extension and CLI are still under heavy development and haven’t yet undergone extensive battle testing. Please send us bug reports and feature requests if anything gets in your way.

Here are a few known limitations you should be aware of in this alpha release:

Come find us and let’s chat about Runme (here’s my email or join discord), we are excited to hear your thoughts!

👈 Back to all posts

But it works on MY machine! Debugging GitHub Workflows with VS Code.

Plagued by a test that passes locally but fails when run in CI? Learn how you can debug such flaky tests by attaching to a running Github workflow.

Which VS Code Extensions are the most useful and perhaps entertaining?

The Stateful team discusses their personal favorite and most entertaining VS Code extensions. We want to explore some of the extensions we found helpful in our day-to-day work and some we think are fun / entertaining.

Run your README.md in VS Code

Run your README.md as an interactive notebook. Zero changes required to the underlying markdown.

Your VS Code Extension on Your Favorite IDE’s Homescreen

Run README.md in your terminal

Easily run your README commands from the CLI using the rdme tool. Check it out.

A Complete Guide to VS Code Extension Testing